Through December 2019 to Feburary 2020, Julie Young and I worked together on a push-to-talk audio chat app; Julie designed the app, and I built it. The app let people create audio channels that would be broadcast to others in a nearby physical location.

Users could see available nearby channels and join them. Using the push-to-talk interface, they could talk to the channel. 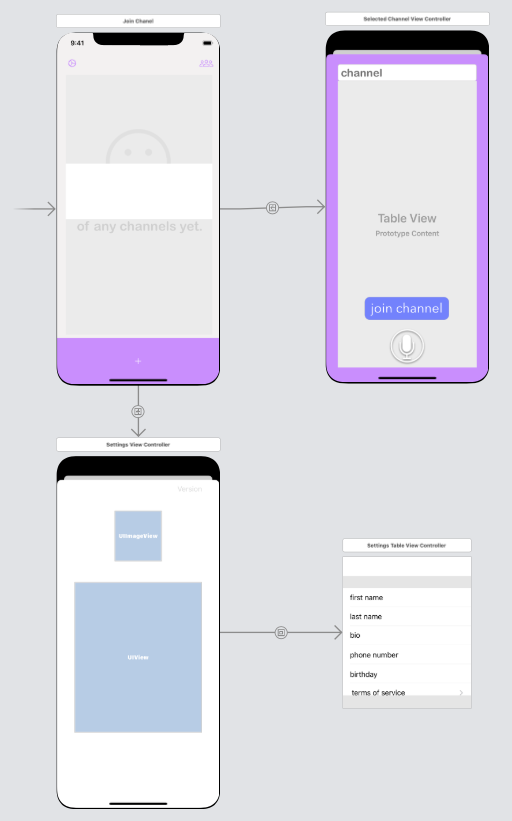 We used the OpenTok (now known as the Vonage Video API) SDK for audio channel creation and communciation. A simple server was hosted on Heroku that allowed for interfacing between our app and the OpenTok API, allowing for easily creating new audio channels.

We created audio channels using a combination of a randomly - generated number, and the user supplied channel name. We passed this to the OpenTok API, and used the token it gave back as a way to create a new audio channel that would then be broadcast to nearby phones:

Whenever a user joined a new audio channel, three objects were created:

The session object would create an OpenTok session with an API key and sessionID.

The subscriber object handled listening to audio streams from a session (in other words, the audio of other participants in the audio channel).

Finally, the publisher would handle the broadcat of your own live audio to other members of the audio channel.

Push To Talk functionality was achieved by setting the publishAudio property of an instance of the OpenTok OTPublisher object to true if the Microphone button was held down:

…and false if the button was released:

We used an open-soruce library called MultiPeer to broadcast and receive channel information to nearby phones. MultiPeer is a wrapper around Apple’s MultipeerConnectivity Framework, and let’s phones transmit information to other phones that are nearby using Bluetooth and WiFi radios.

When a user creates an audio channel, the channel name and ID is broadcast:

This channel info would be broadcast on a loop, so that if a new phone entered the range of the space and they missed the initial broadcast that occured when the channel was created:

Additionally, we if the creator of a channel deleted the channel, that information would also be broadcast in the MultiPeer message, and any other nearby phones would remove that channel from their list of available channels to join.

Any nearby phone that also had the app installed would listen for boradcast messages that included any available audio channels.

The received data would then be parsed to determine the channel information, and create a new channel. These channels would populate a table view with the nearby channels that you could join:

If you clicked on a channel, the app would navigate to a new screen with a button that would stream your microphone audio to the other members of the channel.